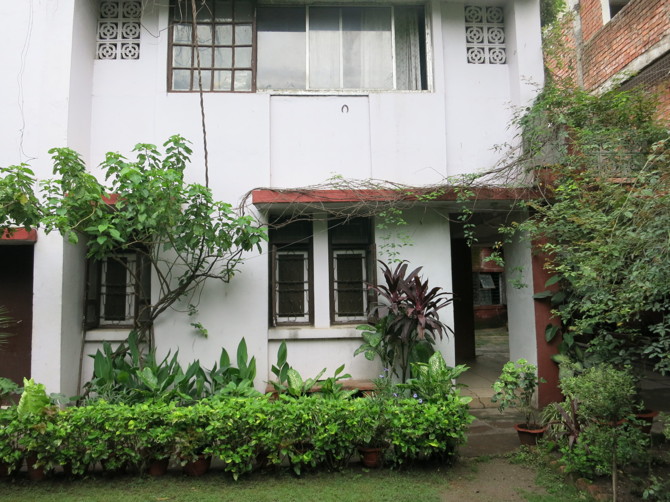 A. rang the doorbell at 6:20 a.m. to ask me if I wanted to go for a walk with the dogs. If you can believe it, I was already up. We were out until about 7. It’s strange that in the space of only a few days the streets that seemed so strange to me are becoming more familiar.

When we came back, there was a fruit vendor outside with bananas and mangoes to sell. With the help of A., I bought my first Indian mangoes. I had one immediately (I was very careful with washing it off and peeling it, don’t worry mom). Wow. Wow wow wow. Very good!

I did some work, writing about my impressions of the museum school to prepare for my discussion with Pradeep and Shibani. Then A. came and had breakfast with me. Ladyfingers (not cookies, little zucchini type vegetables), curd (yogurt with potatoes and spices) and paravat (I probably spelled that wrong, but whole wheat flatbread).

Shibani came to get me at about 11:00. We drove to her house and I marveled at how good she was behind the wheel. She’s only been driving for two months. It puts me to shame (my whole multi-year learning to drive saga seems a little sad.).

I talked with Piyush and his friend (Somesh?) at the Ghosh house. They told me “You have to learn some Hindi to tell your grandparents!” And so, I learned my first Hindi phrase (the ones I learned on the plane hadn’t really stuck, unsurprisingly):

(My reply would be “Mera naam Brianna”)

Yes, attentive readers, it means “What is your name?” They were very good teachers – and I was glad for their help because the phrase would come in really handy later on.

Pradeep was Skpying with a representative from KPMG (an international consulting firm) about their idea for tradeable social credits. He was making some headway in his attempts to convince them to abandon the idea of monetizing the credits. Once he was finished, we started talking about my impressions of the museum school, and slowly moved into a discussion of how to get people to think outside of the box. I thought that helping people “see” the box they are in; the bigger picture they are part of, could get them to start looking for alternatives. Pradeep suggested it wasn’t always easy to get people to see the box in the first place.

It isn’t always easy to see the box in the first place.

We talked about creating an enabling environment where people felt comfortable taking the “risk” of proposing an unconventional idea. We talked about the value in taking the perspective of a fool, someone without preconceived ideas of what is and isn’t possible. Asking foolish questions (like “Where does the electricity in my plug come from?”) and then giving foolish answers (“There’s power in the air. There’s power in the wall.”) can bust open your mind, leading to ideas that may have been right under your nose all along (“Why can’t we use walls to generate power somehow?”).

Asking foolish questions (like “Where does the electricity in my plug come from?”) and then giving foolish answers (“There’s power in the air. There’s power in the wall.”) can bust open your mind, leading to ideas that may have been right under your nose all along (“Why can’t we use walls to generate power somehow?”).

If I could pull all the threads of our conversation together, I would say that we were talking about bringing the child out in people – the insatiably curious, bold and open child. I think the McMaster Social Innovation Lab, to work, needs to be a kindergarten of sorts at the university; where work is serious play.

I headed off to the museum school with Shibani with a task in my mind – what could the children teach me? At first I thought it would just be about the museum exhibits themselves. We piled into the bus again and greeted the children as they climbed up its steps. Seeing me for the second day in a row, they were much more comfortable. Most yelled “Good afternoon!” and waved. On our way to the State Museum, I told Shibani about my plan and she wrote for me how to say “Today you will teach me!” in Hindi “Aaj aap mujhe padhaogay” (I couldn’t for the life of me get the last word right).

We got off the bus and walked to the museum entrance, giving me a chance to try out my one Hindi phrase. I learned a few of the teachers’ and students’ names, and they seemed pretty happy that I was at least trying to speak (try might be an overstatement) one of their langauges.

Then, my big moment came – I had to say the phrase Shibani had written down in front of the children. I absolutely butchered it, but they agreed to teach me anyways. I took off with a group of about fifteen of the older children toward the exhibits.

What followed was two hours of gestures, me repeating Hindi (and mispronouncing) and the children trying to remember English words. It was a bit like a game of broken telephone on both sides, but I did learn some Hindi words (rani = queen, rajah = king, gai = cow, gona = horse) out of the probably hundred that I learned and repeated. It’s not a great success rate, but I’m already thinking about how to improve it. We had fun, though. The kids were so excited to tell me all they knew. I sincerely wish I could have understood more, but hopefully that will come. I learned a lot from them in other ways, though – from their enthusiasm and their liveliness. 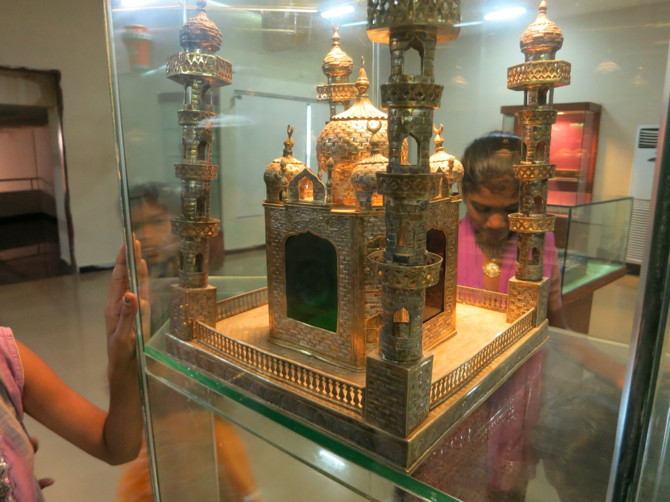 The “Taj Mahal”, they told me

Once class was over, I was exhausted! I rode the bus home and went right to bed, intending to have a thirty minute “power nap”. It was 6:00 p.m. I woke up the next morning! I had slept for twelve hours!

Brianna Smrke, who has been working with the SiG@Waterloo simulation team, is visiting the OaSiS Social Innovations Laboratory in Bhopal, India. She is blogging about her experiences at downwithvowels.