Example of a green city built in SimCity

We have been evaluating policy simulation games, both for design ideas, and for a sense of whether they might be useful for real world policy processes. SimCity, as you might imagine from the title, allows the player to build and run a city. The player has considerably more freedom than might be available to a municipal politician, leading to a certain lack of realism. This article discusses the 2013 version of SimCity, with the GlassBox simulation engine.

There are elements of SimCity that could make it suitable for playing in a policy context. Players of SimCity have been building green cities, for instance. There have been some attempts made to represent particular real cities (see this screenshot of the London city set for instance). Many of the conflicts the player faces within the game do model real municipal, provincial, and federal problems. To make the simulation relevant to specific social issues and innovations would require some modding, possibly considerable modding. The game can currently be modded to control weather/disasters and add new facilities/needs—essential to support new social innovations.

SimCity facilitates group play well. Within the game you can set up multiple regions, each run by a different player, or you can have multiple players play one region, with everyone discussing and voting on a variety of decisions.

As entertainment, the game excels at keeping the player’s attention and giving the player freedom to create whatever setting they want for their Sims. It can operate as a useful environment for thinking about policy, insofar as the player can recreate real-world settings and observe the behaviour of each agent. Simulating specific problems, however, may be very difficult until more advanced modding tools arise—which makes having a modding community like the ones found in the Simtropolis forums such a delight!

An introduction to SimCity in pictures 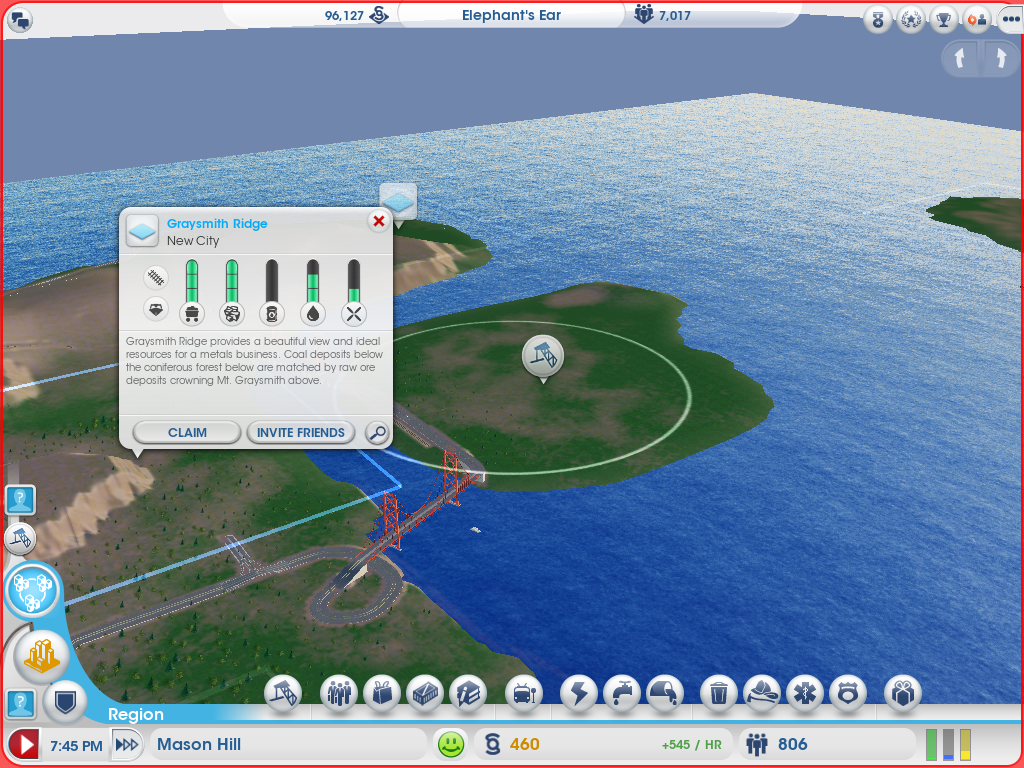 We start by claiming a region to build our city. Each region has its own combination of resources, which can be extracted and used or sold to neighbouring regions. If we lack in any resource, we can also buy from neighbouring regions, provided that they are developed. 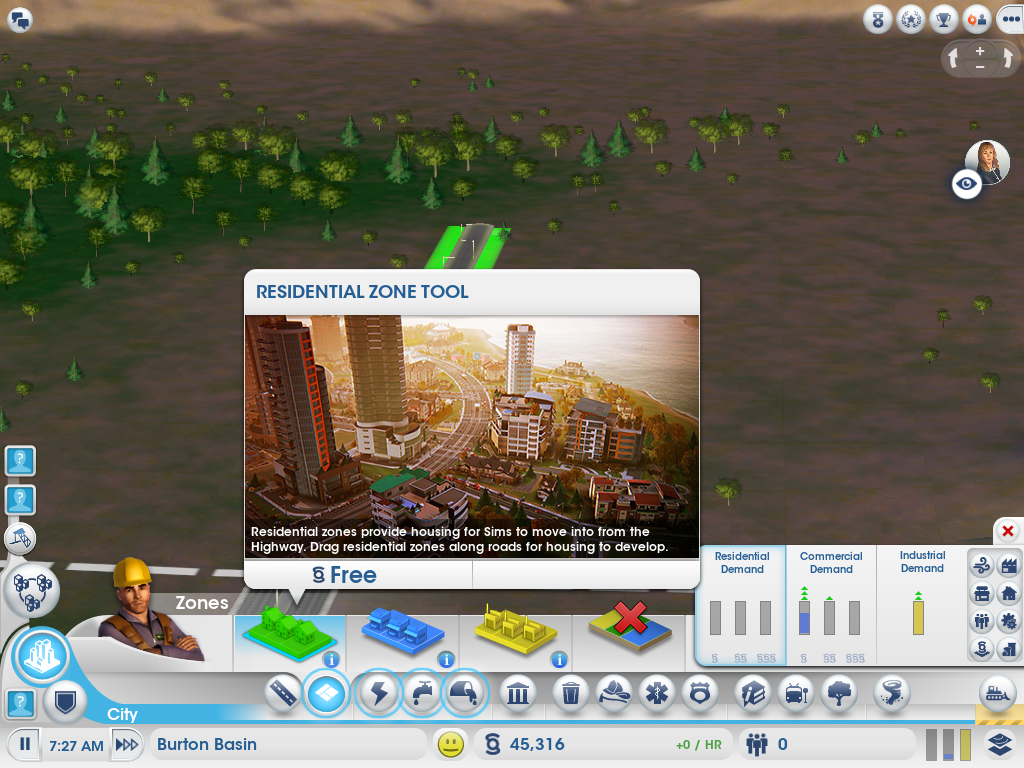 We then connect roads to the main highway and assign different zones to them. Residential zones (green) populate the city with Sims, commercial zones (blue) keep your Sims happy, and industrial zones (yellow) provide your Sims with jobs. 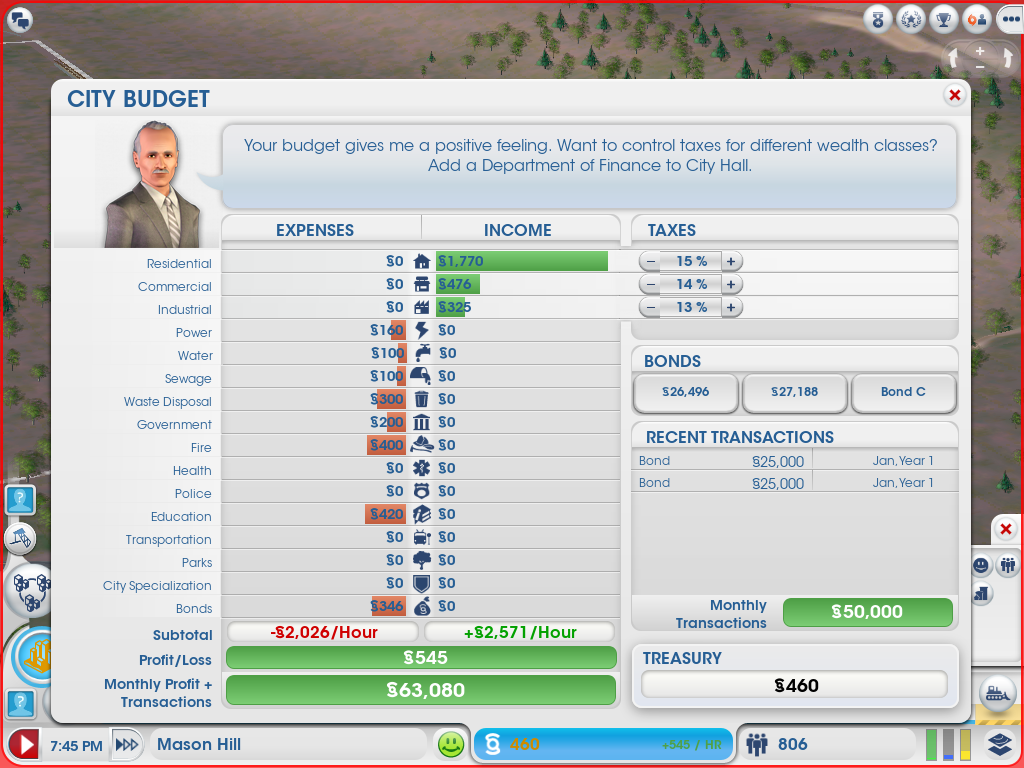 Each zone adds to the city’s revenue via taxes. You can set the tax rate for each zone as well as monitor expenses by clicking on the money bar at the bottom. In dire situations, you even have the option of issuing up to three bonds, which will have to be repaid, with interest, by the end of the year. 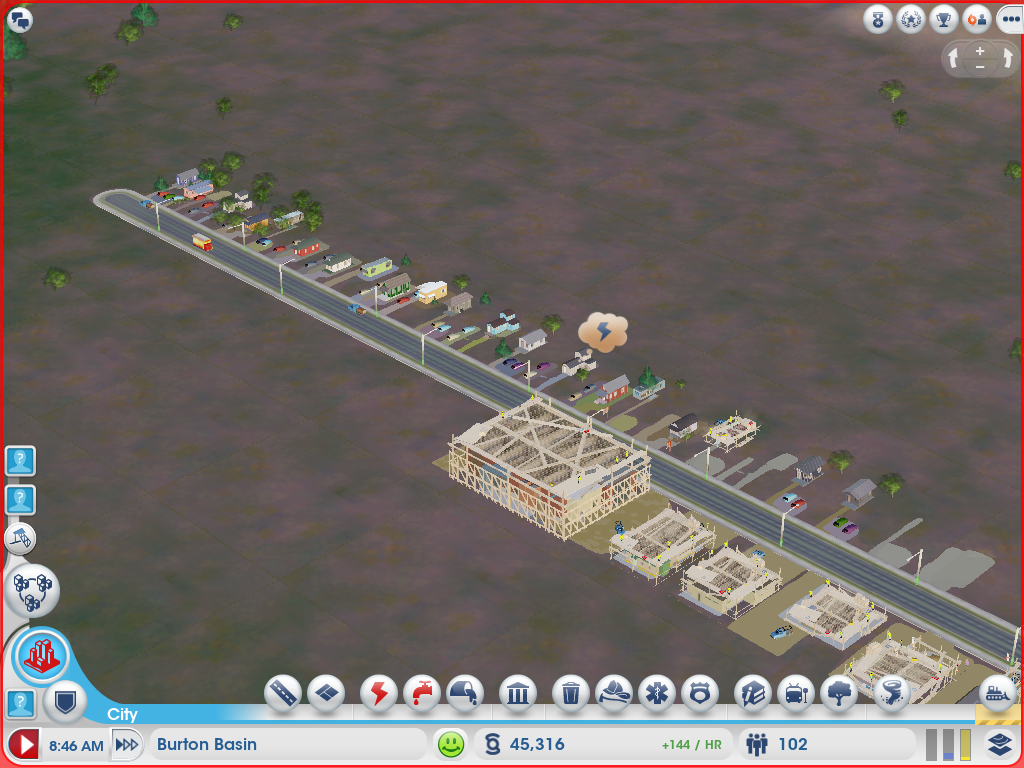 If you haven’t provided your citizens (Sims) with some of their basic needs, they won’t hesitate to tell you. Icons at the bottom will also start to flash if you’ve been neglecting your Sims well-being. Make sure you have enough Simoleans to buy the facilities they need! 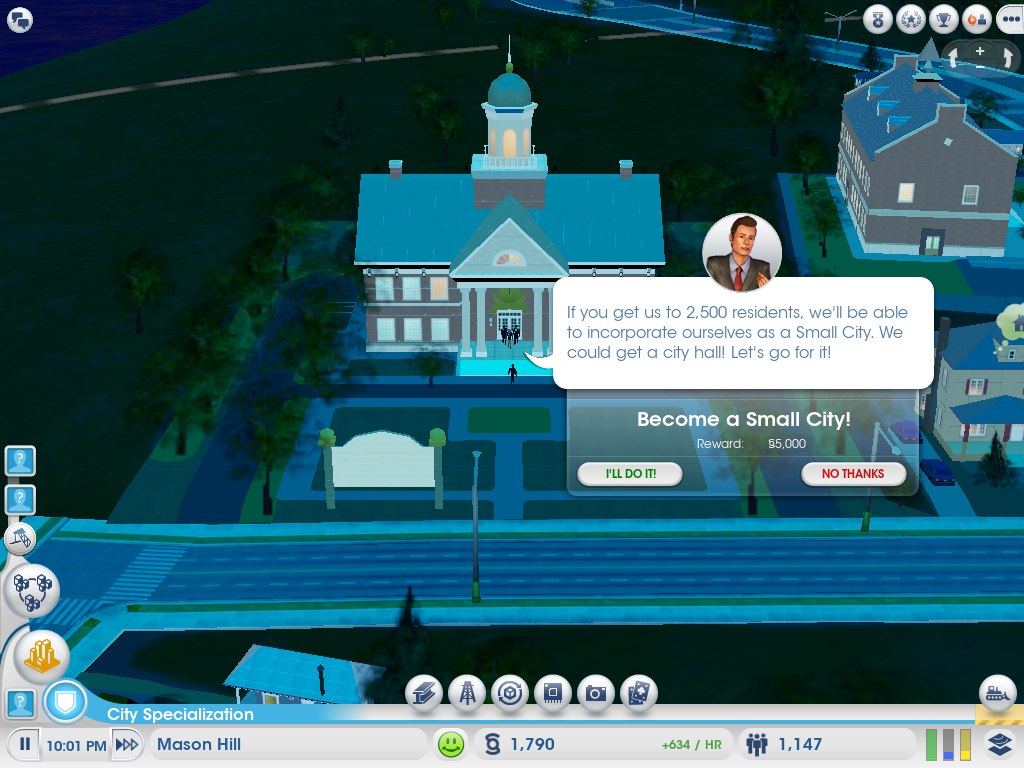 Sims’ thought bubbles will also appear to tell you how they’re feeling, or to ask you to do something (e.g., populate the city more, or have a fireworks party). This keeps the game very busy, and full of exciting, and sometimes horrifying, results. 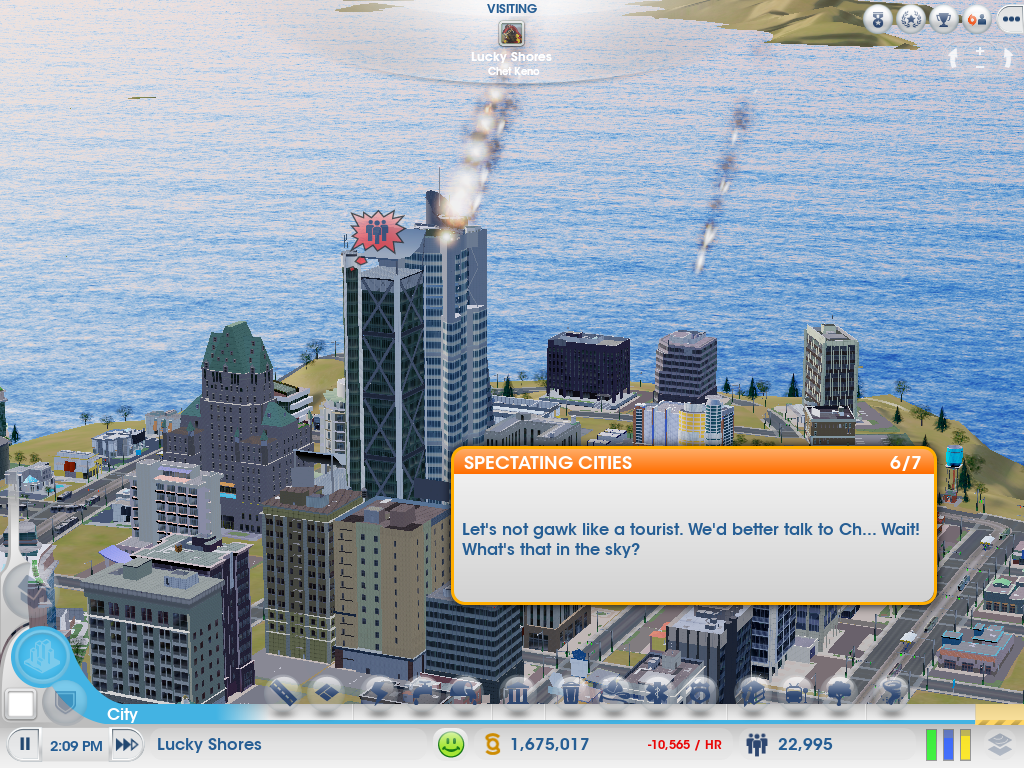 Be careful of natural disasters!

What is the game simulating? Is the simulation adequate? How could it be improved?

The game simulates urban planning and design, from the perspective of the mayor (but in a “god-like” omniscient way, where the player has much more control than a mayor ever would). It adequately represents relationships between agents and their respective environments, including those between citizens and the city infrastructure, and between the city infrastructure and the natural environment. The behaviour and preferences of individual agents are simple, but for the purposes of modelling these three different relationships, the simulation serves well.

What lessons can we learn from SimCity and bring to other environments?

SimCity tracks individual agent behaviour (and thoughts) in a way that is noticeable, but which is not intrusive to gameplay. It organizes different pieces of the game well, so nothing is too difficult to find. There are several pieces to the game which give players more control (e.g., density, citizen safety/satisfaction, city infrastructure, and maintaining municipal economics). These additional pieces come, however, with a steep learning curve that may be difficult for non-gamers to overcome.

Is the game play the right level of complexity? Too simple? Too complex?

The game can be a bit overwhelming starting from scratch, but can be played in sandbox mode, or by resuming pre-existing regions. The  sandbox mode allows the player to play the game in any way they would like, without having to worry about financial constraints or unlocking game features. There is a bit of a learning curve getting started with the game, but many of the game pieces can be learned or understood intuitively. Players can overcome the complexity of the game over time. 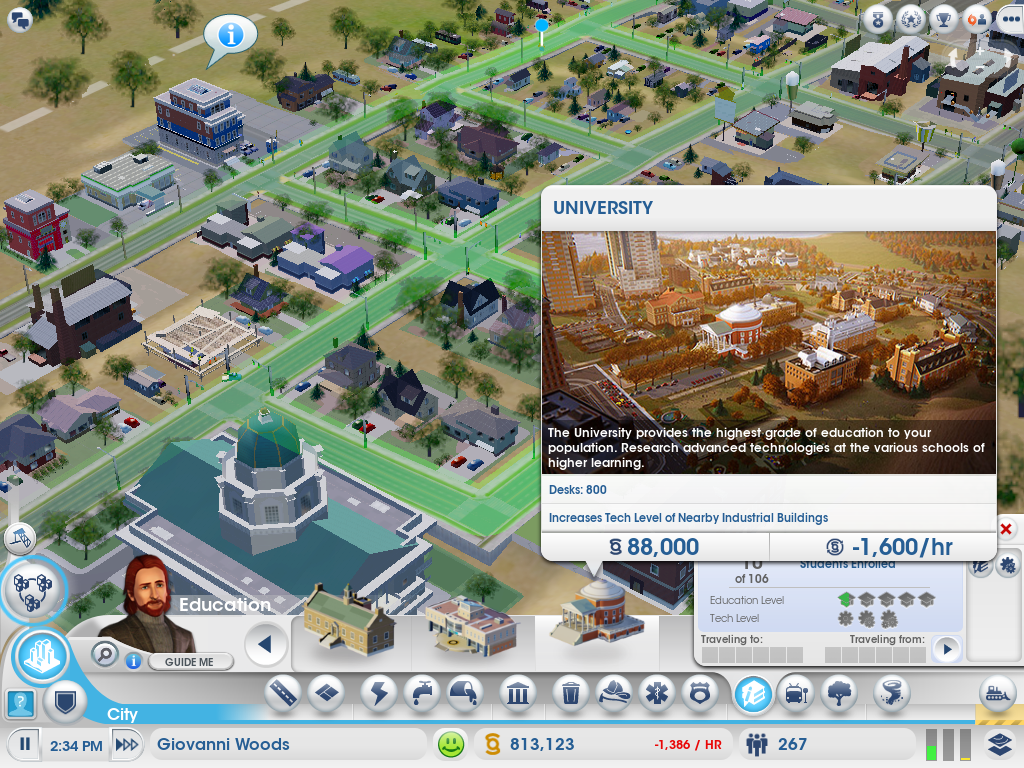 Sandbox mode relieves any economic burden and allows access to all levels of resource facilities. It also prevents disasters like fires and meteor showers from destroying your city.

Is it fun? Why or why not? Would you want to play this a lot?

Very fun! There is much to do and there are many goals, both long-term and short-term. Just as things start getting mundane, the game may hit you with natural disasters, fires, and robberies that will keep you busy.

Is the game free?

Is it open source?

There is an open source version of the original SimCity called Micropolis.

How moddable is it? Are there instructions for modding? A community of modders?

A community of modders is working on a modding toolkit called SimCityPak that will (eventually) allow you to mod anything. Currently property and text files written in javascript and json can be modded.

How many people are working on it / worked on it?

How difficult would you judge it to be to reimplement from scratch (a matter of weeks, months or years).

What flaws does the game have?

A possible flaw in the game is the lack of offline playing. Requiring online play is part of EA’s strategy for digital rights management. The fact that available servers are constantly losing connection or under maintenance can frustrate players (as useful as servers are for multiplayer gaming). SimCity gamers have found temporary solutions and have attempted to mod the game to create their own offline mode, but no official updates have been issued by EA.