I went upstairs to settle my accounts with Mrs. Mukerji and found a little package waiting for me. Inside was tea from the “tea garden” (tea plantation) that her son manages, a book of poetry by Rabindranath Tagore (an Indian Nobel Laureate) and a biography of a Polish poet (in honour of my Slavic heritage). I was touched by the thoughtful gifts. It’s hard to believe that in two days I won’t be having breakfast with her or her daughter, at least not for a very long while.

An early morning walk, a huge breakfast and some frenzied writing occupied my morning.

You keep talking about writing but you never let us see any of it!” You say. Well, kind stranger, you’re in luck. I’ve finished drafting and formatting the two ‘guides’ I wanted to write (or rather, realized I wanted to write) in the course of my time here.

Disclaimer: these guides are aimed at a very specific audience (the university students who will be part of the McMaster Social Innovation Lab) and are trying to be provocative but not unnecessarily cruel.

The afternoon was my last day at the Museum School. I would get a chance to see the students perform the dances they have been learning for the School’s annual function, which is happening in September. As I’ve mentioned before (“As I’ve forgotten!” you reply), the theme of the function is the life of a girl.

I watched as students of different ages used their bodies to tell me what words could not (literally could not because, to my chagrin, I still do not speak more than a few words of Hindi). I was able to ‘read’ and follow the stories of each song. I took a lot of video, but it’s probably too large to be able to upload here. If anything changes I’ll direct you to the link!

After watching the dances, the skies opened up and it started to pour. It was the kind of violent monsoon rain you probably can all picture. Big, fat rain drops. We run away from them and get inside. I got a chance to say goodbye to the students and to tell them (through Shibani, who interpreted for me, bless her heart) how much they had taught me.

Then, I had a bit of a silly idea, but they indulged me. Before I left for India, my aunt Donalda gave me a pack of playing cards with the Canadian flag on the front. I decided to hand out these cards to the students I had worked with most closely as a way to remember our time together. They were pretty excited, though I could tell that some of them were thinking “What the heck is this for?” I’m not sure whether playing cards are all that common here. One of the boys was so excited because his name was Ashish and he got an ace. “An ‘A’ for me!” he gestured to me, smiling. 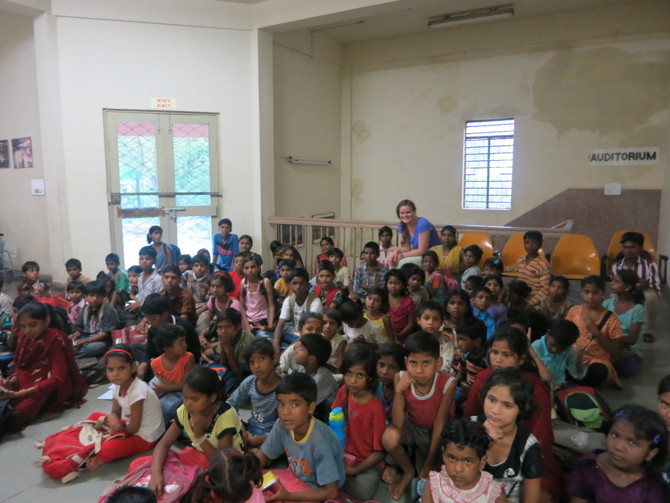 Me with my teachers!

Shibani took a picture of me with all the students and then I gave the rest of the cards to the teachers. I came back to the main hall to line up for the bus and was surprised when the students ran up to me with paper in their hands.

Exquisitely folded paper, that is. I am now the proud recipient of two paper flowers, a gun, a boat, a bunny and a stalk with leaves. Someone else gave me what he said was “a globe!”; a pom-pom like ball with a nail in it. I was tickled by their creativity and touched by their thoughtfulness.

I boarded the bus for the last time and headed home.

Anu was kind enough to take me out for dosas (http://en.wikipedia.org/wiki/Dosa) and ice cream. I enjoyed the night-time walk to the market.

Tomorrow is my last day in Bhopal. I feel ready to move to a new place, but grateful for the time I’ve spent here.

Brianna Smrke, who has been working with the SiG@Waterloo simulation team, is visiting the OaSiS Social Innovations Laboratory in Bhopal, India. She is blogging about her experiences at downwithvowels, which you can also follow here at socialinnovationsimulation.com.