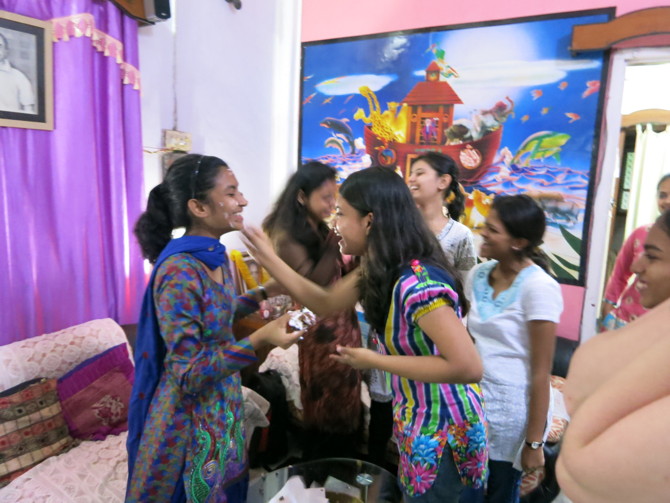 Cake smearing tradition: “Explain this to me like I’m a person from a country where there isn’t X”

I woke up still full from the birthday party meal the night before. “This is my last Monday in Bhopal,” I thought. On July 25 I will be flying to Chennai, and then making my way to Pondicherry for a workshop on the Rural Education pilot projects OASiS is helping organize.

After a walk and breakfast, I launched into some more writing. I now have alllllllmost all of my internship ‘deliverables’. What I define as a deliverable is changing even as I speak, but so long as I put in a good effort for the next two days I’ll have written and shareable versions of what I came here to get.

Today, Pradeep and I had our first negative brainstorming session.

Today, Pradeep and I had our first negative brainstorming session (not a moment too soon, if I might add)! One of my last challenges is to work through a problem on my own and come up with a solution. After a few false starts I’ve settled on the task of making Christmas merrier for the average Canadian family. Well, the only average Canadian family I know well, which is my own family. I figure, start with what you know, right?

I had already drilled the problem down, which is OASiS lingo for figuring out who is involved and what actions are involved. I decided that the buying and exchange of gifts was adding to holiday stress for little apparent payoff.

I had already drilled the problem down, which is OASiS lingo for figuring out who is involved and what actions are involved.

I interviewed some members of an average Canadian family and mashed their opinions together with my own to come up with some potential solutions. Gathering the responses was a lot of fun. Seriously!

The solution I chose to bring up with Pradeep was not changing the gift-giving tradition but changing what is given as a gift. Even as I am writing it now I am thinking of the swing example. I might just be trying to put wheels on a structure that won’t ever “work” in the way I want it to. Anyways, I’ll keep telling you and I’ll sleep on the thought. Maybe something will come. I imagined that instead of exchanging material things, each person was assigned to another person and had to give them a story or memory instead. They’d write something up, print off a copy and bring it too. It could be added to a binder to make a growing family history, one gathering at a time.

So I explained this to Pradeep (Well, after explaining the intricacies of Christmas to Pradeep, which was pretty eye-opening even for me. Maybe a tactic of mine can be “Explain this to me like I’m a person from a country where there isn’t X” when I’m dealing with others?) and then he started playing devil’s advocate. He took on the role of someone who would be very hard to convince and we started to argue. (This is what I meant by negative brainstorming).

“Seriously, you want me to exchange gift giving for stories? I don’t want to hear boring stories about my family. I’ve probably heard them already anyways. And this bit of gift-giving is the only excitement I get! Why do you want to take that away from me? I like to get presents and I like to shop for them. It’s exciting.”

Now, before I go any further, I have a confession to make.

“You’ve actually been in your basement this whole time and fabricated the entire trip to India?”

Ha. No. It’s this: I haven’t always been the best (still am not the best) at taking criticism.

“You mean when you were eight and someone told you your drawing needed work you went away and cried?”

You know, I thought you promised me you weren’t going to bring that up again.

In this case, though, it felt fun and safe. A little playful, even. And I was struggling to fight back in a good-natured way, trying to understand the criticism rather than refute it so I could be “right”. I was trying to figure out if there actually was a gap in my idea or if I had just not communicated it very well, at least not in a way that would satisfy this particular type of person.

It was the first time I had participated in this good-natured back and forth, something I had seen so many times in my travels with OASiS – at the Museum School, among its volunteers and even when I went up to the Rural Education Project in Seoni.

And I realized that what this good-natured back and forth does is open you up, force you to look at your assumptions (for example, one of mine was that gift-giving serves no real good purpose) and get you to start devising solutions right away – and then test them verbally so you can get instant feedback. You can feel your brain working.

Maybe it’s sad to say but this kind of discussion has largely been missing from my life. I remember how much I like it.

Regardless, it’s another piece of the process to bring back to Hamilton and the Social Innovation Lab. (Not that people don’t do this in Hamilton already, but this Hamilton-bound person had to be convinced of its value).

I turn away from you and say “Goodbye Mondays in Bhopal! Hope to see you again someday!”